A linear is a type of adventure where the encounters are laid out along a set route which the characters follow. Encounters are variable in nature - some are intended to be fights, others will have some kind of puzzle for the Player Characters to solve, and some will involve diplomacy. The characters will usually have an end goal of some kind, ranging from taking down an evil cult to looting the tomb of a dead god. Usually an NPC "character ref" accompanies them as a member of the character party to ensure they don't stray off course by accident or design.

We run linears once per fortnight on Saturdays during term-time, most often on Grantchester Meadows, but sometimes in other locations. These usually start at 1pm and last 2-3 hours. Occasionally we run night bashes starting at a later time.

An interactive is a session of the game held indoors at whatever room the Society has booked that week. Interactives are held on Friday evenings, usually at 7.00pm. In interactives, your character stays in the room and socialises with the other player characters (PCs). Events come to you, in the form of non-player characters (NPCs or "monsters") sent in by refs to provide opportunities to get involved in plot. You can expect many varied encounters throughout the evening and also plenty of opportunity for the PCs to interact and work together to solve problems.

Sometimes we run one-off larps distinct from our main game - these will tend to be self-contained and have minimal need for knowledge beforehand, so they're a great way to try out larp if you don't want the commitment of a longer-running game, as well as to explore a wider variety of larp styles.

On weeks without linears we will often run a weapons practice instead. These are an opportunity to improve your combat skills and are also really good fun. Don't worry if you don't have any larp weapons of your own - the society has plenty in the armoury which it will lend out.

We occasionally have kit makes - these will have patterns and experienced people on hand so are great for if you want to make your own kit but aren't sure how to go about it. 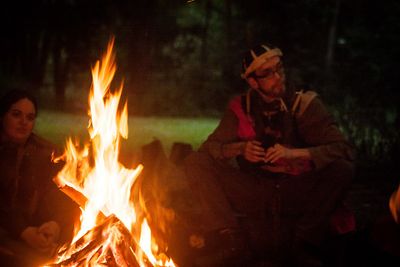 At the end of the year we usually run a '3rd Year Goodbye' (3YGB). This is weekend event where players are IC during the day and OC at night, combining elements of linears and interactives and and containing lots of plot.